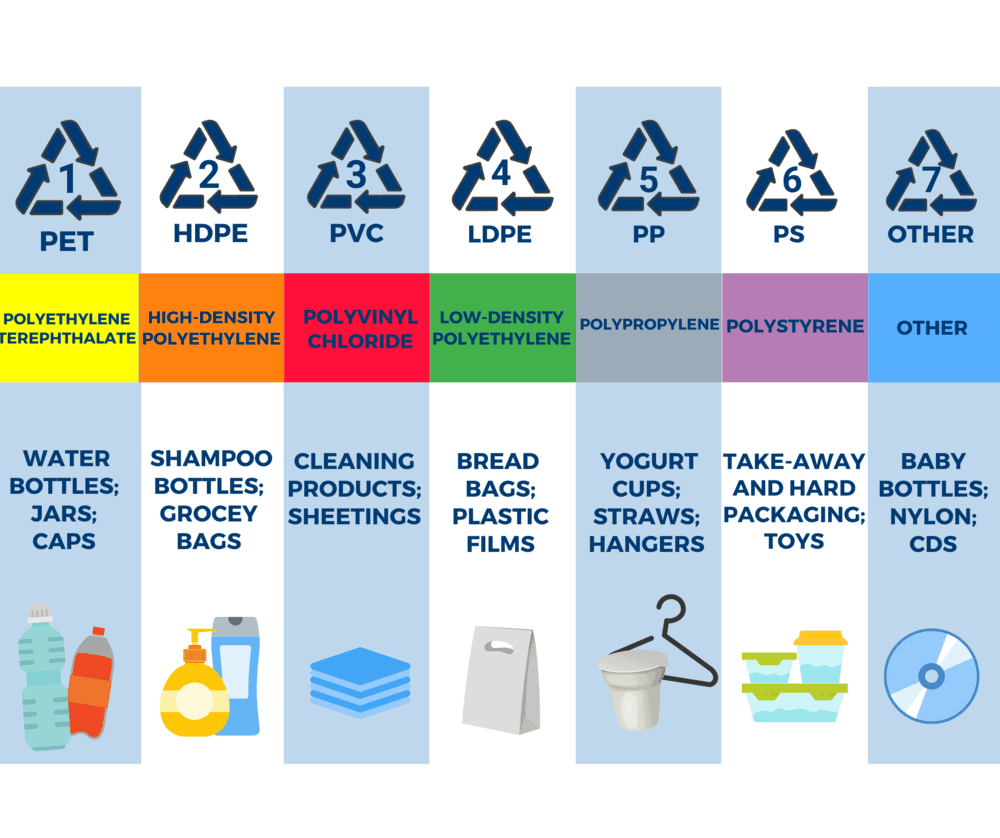 What Are the Different Types of Plastics?

Plastics that belong to group number one are made out of polyethylene terephthalate or PET. It holds the number one spot because of its widespread utility.  It is mostly used for food and drink packaging purposes due to its strong ability to prevent oxygen from getting in and spoiling the product inside.

Technical name – High-Density Polyethylene – it’s an incredible resistant resin used for grocery bags, milk jugs, recycling bins, agricultural pipe, but also playground equipment, lids, and shampoo bottles among others.  Because it’s made with long unbranched polymer chains it’s much stronger and thicker than PET. Also, it is relatively hard and resistant to impact and can be subjected to temperatures of up to 120 °C  without being affected. As far as its disposal is concerned, HDPE is accepted at most recycling centers in the world, as it is one of the easiest plastic polymers to recycle.

Polyvinyl chloride is the world’s third-most widely produced synthetic plastic polymer. It comes in two basic forms: rigid and flexible. In its rigid form, PVC is largely used in the building and construction industry to produce door and window profiles and pipes (drinking and wastewater). When mixed with other substances, It can be made softer and more flexible and applied to plumbing, wiring, and electrical cable insulation and flooring.

Contrary to HDPE, LDPE is characterized by low-density molecules, giving this resin a thinner and more flexible design. It has the simplest structure of all the plastics, making it easy and cheap to produce. Used in plastic bags, six-pack rings, various containers, dispensing bottles, and most famously for plastic wraps, is not often recycled through curbside programs.

Polypropylene is the second-most widely produced commodity plastic and its market is forecasted to grow even more in the following years. Hard and sturdy, it can withstand high temperatures and is found in Tupperware, car parts, thermal vests, yogurt containers, and even disposable diapers.

Fun fact: because it is VERY resistant to fatigue, PP is usually used for living hinges (the thin piece of plastic that allows a part of a product to fold or bend from 1 to 180 degrees).

Polystyrene is the sixth type of plastic on the list and it can be solid or foamed. It is a very inexpensive resin per unit weight and easy to create, for these reasons it can be found everywhere: from beverage cups, insulation, packing materials to egg cartons and disposable dinnerware. Perhaps better known by its commercial name – Styrofoam – it’s highly inflammable and dangerous as it can leach harmful chemicals, especially when heated (which often happens because, as it’s found in disposable take-out containers, people oftentimes microwave it to heat up the food inside it).

Environmentally speaking it’s among the worst types of plastic: first, it is regarded as not biodegradable. Second, polystyrene foam blows in the wind and floats on water, due to its low specific gravity. Animals do not recognize it as artificial and may mistake it for food causing serious effects on the health of birds or marine animals that might swallow it.

In addition, polystyrene is not accepted in curbside collection recycling programs and is not separated and recycled where it is accepted. To sum up, it’s a no-go.

If the plastic cannot be identified in the six types above-mentioned, then it will be included in group number 7. The best-known plastics of this group are polycarbonates (PC) used to build strong, tough products. Polycarbonates are commonly used for eye protection in the creation of lenses for sunglasses, sport, and safety goggles. But they can also be found on mobile phones and, more frequently, in compact discs (CD).

In recent years, the use of these resins has been controversial: the basis of this controversy is their leaching that, occurring at high temperature, releases bisphenol A, a compound that is on the list of potential environmental hazardous chemicals. Moreover, the decomposition of BPA in landfills does not occur meaning that this chemical will be persistent in the ground and will eventually find its way into water bodies contributing to aquatic pollution. On top of this, plastics number 7 are almost never recycled.