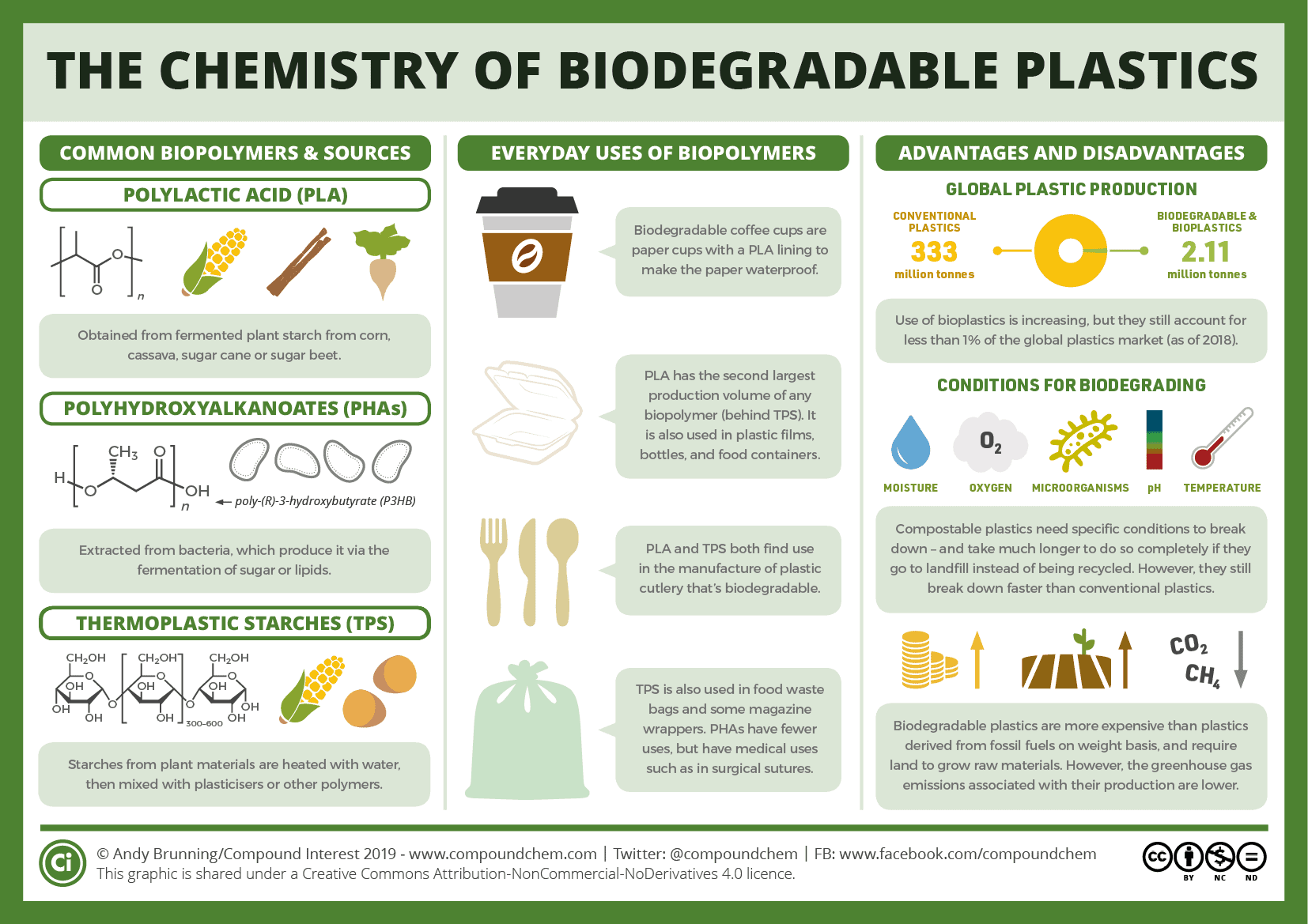 Biodegradable plastics seem like they’ve popped up everywhere, but in reality, they still make up a tiny proportion of the plastics we use. As of 2018, biodegradable and bioplastics combined made up just 1% of the global plastics market. Though their usage is growing, they’re still only forecast to account for 2.5% of the market by 2020.

There’s a distinction to make between different types of bioplastics. It’s possible, for example, for some fossil fuel-derived plastics to be made from bio-based materials instead. On the other hand, there are plastics produced from plant-based materials that are chemically distinct. It’s the latter group that we’ll be focusing on here.

Biodegradable plastics come in different varieties with varying uses. The three most commonly used types are polylactic acid (PLA), thermoplastic starches (TPS), and polyhydroxyalkanoates (PHAs). As the ‘poly-‘ prefix for each suggests, they’re all long-chained polymers formed from simple monomers.

Biodegradable polymers are mostly produced from plant-based materials. PLA is obtained from fermented starch, which is itself obtained from corn, cassava, sugar cane, or sugar beet. TPS is produced by heating starch from plant materials with water and mixing it with plasticizers. PHAs are distinct in that they’re extracted from bacteria, which produce them by fermenting sugar or lipids obtained from waste or plant-based feedstocks.

TPS is the biodegradable plastic with the largest production volume. That fancy new biodegradable bag your magazine subscription drops through your letterbox in? TPS. The biodegradable cutlery that’s replaced the plastic knives and forks in the canteen? TPS.

Other biodegradable plastics do get a look in, like PLA, which has the second-largest production volume. It’s used in plastic films, bottles, and food containers. The biodegradable coffee cups your local café has switched to? They’re lined with PLA to stop the coffee seeping through the cardboard, replacing the previous plastic lining. PLA actually has a relatively low melting point, so where resistance to higher temperatures is needed, it’s used in a crystallized form that is more heat-stable.

PHAs see fewer uses which we encounter on a day-to-day basis. However, they do have medical uses – for example in biodegradable medical sutures. To an extent, their use for other applications is limited by their production costs.

This is an issue that affects the other biodegradable plastics highlighted, too. All of these plastics are more expensive to produce than plastics produced from fossil fuels (on a weight basis). According to the Earth Institute at Columbia University, PLA can be 20-50% more costly than conventional plastics. Crops from which the raw materials are harvested need to be grown, and this requires land, fertilizers, water, and time. As the enthusiasm for biodegradable plastics increases and more cost-effective production methods become available, the cost of these plastics is dropping, but they’re currently still pricey.

That’s not to say that their product is without its benefits. The volume of greenhouse gases emitted during their manufacture is less than that of fossil fuel-based plastics. It’s estimated that if all plastic production were to switch to biopolymers, the greenhouse gas emissions in the United States would be reduced by approximately 25%.

Of course, the key selling point of biodegradable plastics is in their name – their biodegradability. Isn’t it reassuring when you bin your biodegradable coffee cup to know that it’s having less of an impact on the environment, and breaking down quickly when it gets to landfill? Well, not so fast.

Biodegradable plastics do, as their name suggests, biodegrade – but the conditions need to be right. They need a moist environment with plenty of oxygen (aerobic conditions, to give it the technical term). They also need the correct microorganisms, pH, and temperature for optimum break down. Buried under all of the other trash at your local landfill site, it’s very unlikely that these conditions are being met. While they might still break down more quickly than conventional plastics, it’s going to be more than a matter of months or even years.

So, there’s still work to do before we can reap the full benefits of biodegradable plastics. And they’re still not really a fix for some of the other issues with plastics we’re currently wrestling with. For example, they don’t biodegrade well in seawater. Even if we switched our entire plastic use to them, it wouldn’t resolve the concerns over plastic pollution in our oceans.

In short, biodegradable plastics are likely to become even more widely used in the future. This is positive from an environmental perspective, but will also require countries to develop infrastructure for optimal recycling of these materials. Gradually, they’ll allow us to reduce our reliance on oil-based plastics and non-renewable resources, as well as reducing greenhouse gas emissions.

A Simple Definition Of What Biodegradable Means

“Biodegradable” refers to the ability of things to get disintegrated (decomposed) by the action of micro-organisms such as bacteria or fungi biological (with or without oxygen) while getting assimilated into the natural environment. There’s no ecological harm during the process. We can either speak of biodegradable solids (also called compostable) or liquids that biodegrade into water.

What Encompasses Biodegradable Waste According To The European Commission?

The European Commission considers bio-waste to encompass biodegradable garden and park waste, food and kitchen waste from households, restaurants, caterers and retail premises, and comparable waste from food processing plants. It does not include forestry or agricultural residues, manure, sewage sludge, or other biodegradable waste such as natural textiles, paper or processed wood. It also excludes those by-products of food production that never become waste

The Environmental Impacts Of Biodegradable Waste

What Is Biodegradable Plastic?

Biodegradable plastic is plastic that’s designed to break up when exposed to the presence of microorganisms, it is usually made from natural byproducts, and follows rigorously controlled conditions of temperature and humidity in industrial environments. Most biodegradable and compostable plastics are called bioplastic and they are generally made from plants (such as bamboo or sugarcane) rather than fossil fuels. For these bioplastics to be fairly and effectively biodegradable, their compostability needs to be confirmed according to international standards to make sure they can be handled in industrial composting plants.

One of the most recognized standards regarding biodegradability is the European EN 13432. According to NaturePlast’s literature review of standards on this subject, for something to be considered biodegradable it needs to: