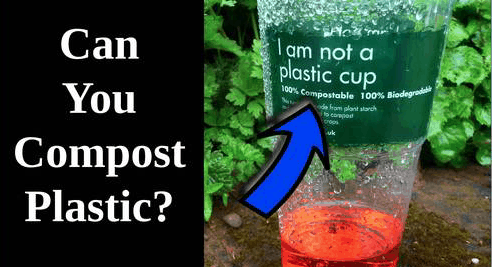 My Master Gardener group had a year-end party and one member brought some compostable plastic drinking glasses. As I was collecting them at the end of the evening I started to wonder how well they decomposed. I had previously looked into compostable teabags and was surprised by what I learned. Are these drinking glasses just some more greenwashing?

In this post, I’ll discuss compostable plastic, compare that to biodegradable plastic, and explain the role of all of these in the garden.

What is Compostable Plastic?

I thought this was a simple question, but its not. Different organizations use different definitions and the general public has their own idea. As a gardener, I assumed I could drop it into a hot composting bin and it would decompose, but that has nothing to do with the definition.

Compostable plastic is defined by the standards association ASTM International (ASTM) as “a plastic that undergoes degradation by biological processes during composting to yield carbon dioxide (CO2), water, inorganic compounds, and biomass at a rate consistent with other known compostable materials and that leaves no visible, distinguishable, or toxic residue.”

Note that the time frame or the condition of composting is not part of the definition.

Biodegradable is defined as ” a product that completely breaks down, given the right conditions and presence of bacteria or other living organisms, to its basic components.

The keywords here are “the right conditions”, which can be defined for each biodegradable product.

When the right conditions are a composting environment, the terms compostable and biodegradable mean the same thing. When the degradation needs an environment other than composting the two terms are not synonymous.

The term bioplastics is also confusing, misused and misunderstood. Things are further complicated by the fact that there are no labeling standards, at least in the US, for terms such as biodegradable, degradable, compostable, starch-based or plant-based.

Will Compostable Plastic Break Down in a Composting Bin?

The short answer is probably not. If it is labeled as “home compostable” it might, but most compostable plastic does not carry this label.

For example, Polyactic acid (PLA) is a popular compostable plastic used to make drinking cups, clamshell containers and plastic cutlery. It requires 140 F (60 C) to decompose, which is much hotter than a backyard compost bin can maintain long enough and throughout the complete pile.

Commercial composting facilities carry out composting in closed chambers and they routinely reach the higher temperature needed, however, many of these facilities run on a 30 day cycle, and PLA takes 60-90 days to decompose. At the end of 30 days, the plastic is still intact and gets filtered out and sent to landfill.