For more than decade bioplastics have, essentially, been a giant lab experiment. Plastics made from plants hold a lot of promise, given that most consumer plastic on the market today is derived from petroleum—which we would much rather keep in the ground. Some bioplastics have even been turned into garbage bags, bottles, and straws available for purchase by any company or individual who seeks them out. Still, only 2% of the world’s 300 million tons of plastic production comes from plants, according to Lux Research.

But now, prices for bioplastics are plunging to that of conventional plastics, and manufacturers are finally ready to swap out petroleum for plants. The result is that most of the expected doubling (pdf) of the global plastic productions over the next 20 years could come from plants.

“Multinational corporations are now the key driver commercializing bio-based products,” writes Victor Oh, a bio-materials analyst at Lux Research by email. In September, the furniture giant Ikea announced it is shifting to “renewable, bio-based materials;” it plans to launch its first proof-of-concept bioplastic product next year in partnership with chemical refiner Neste. Packaging company TetraPak will roll out 100 million of its first fully biologically-derived cartons, Tetra Rex, by the end of 2016 with the aim of eventually making all its products 100% renewable. Coca-Cola Company announced a 100% bioplastic version of its “PlantBottle”  after manufacturing 35 billion bottles using 30% bio-based plastic since 2009.

Price makes it all possible, says Mike Hamilton, CEO of Renmatix, a developer of biomass alternatives to petroleum. The cost of some next-generation bioplastics are now even with those derived from oil —a milestone Renmatix says it can meet even at today’s oil price of around $50 per barrel (other companies have said their break-even figure is closer to $130, a price last seen in 2008). Their technology is attracting dollars from fossil fuel heavyweights: Renmatix says it recently struck deals with French energy giant Total and the chemical company BASF to reserve more than a million tons of biorefining capacity for use in turning trees into plastics and fuel. Renmatix also raised $14 million from investors led by Bill Gates for its first commercial biorefinery; Gates has said he sees the development of this infrastructure as a crucial part of the effort to decarbonize the industrial sector. 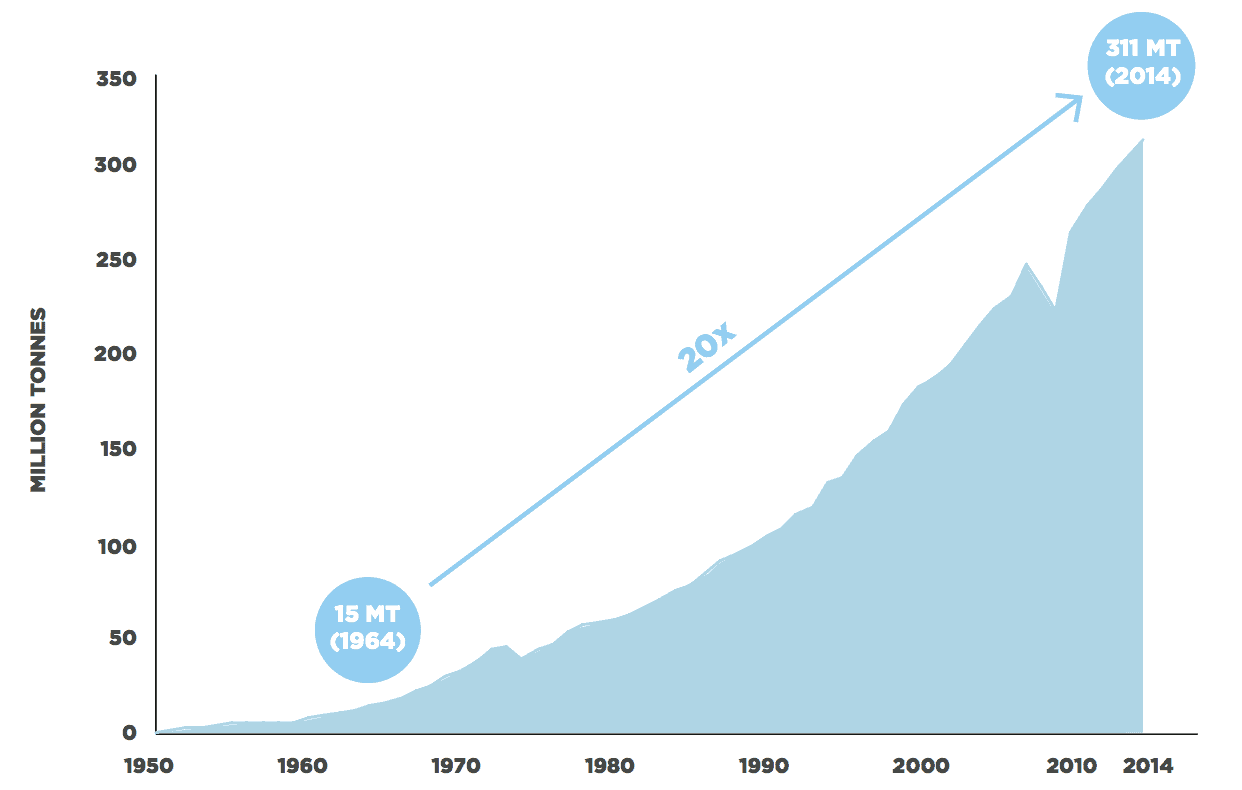 The key breakthrough for bioplastics was technology to cheaply extract sugars from low-quality cellulosic biomass instead of food crops. First-generation bioplastics in the 1990s used corn, sugar, and other food crops as raw materials. The process was expensive and raised food prices by diverting edible crops. Instead, scientists sought a new approach using low-quality, woody biomass from agricultural residue, tree waste, and grasses. This method dissolves sugars from natural plant polymers such as cellulose and lignin with highly heated and pressurized water, avoiding food crops entirely. That’s the basis for technology now being commercialized by companies such as Renmatix, Natureworks, and Metabolix.

But it still can’t sustainably replace the 8% of global oil production now devoted to plastics manufacturing. While fruit juice waste, sewage, algae, pine trees, and straw (pdf) are promising sources of bioplastics, no one has made commercial bio-based polymers on a global scale.”The reality is that this doesn’t exist today,” Renmatix’s Hamilton wrote by email. “How quickly we can grow that base and amount of materials, compared to how quickly populations are growing and the intensity of demand for products, is going to be a significant limitation.”

Search efforts are likely to grow more urgent in the next few years, as markets and governments in the US and Europe are sending the message that it’s time to start phasing out conventional plastic. France recently banned non-biodegradable plastic cutlery, plates, and cups. At least ten major US cities have enacted zero waste goals, and bans on plastic bags and other waste are multiplying. Globally, the Paris climate talks companies have committed countries to find new industrial supply chains independent of fossil fuels. Once the right materials are found, say researchers (pdf), more than 90% of today’s plastics could one day become bioplastics.