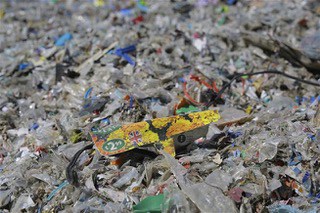 More than half of all the single-use plastic waste in the world is generated by just 20 companies, an analysis has found. And tops on the list of 20 is ExxonMobil, which is responsible for 5.9% of the total, the Guardian reports, followed by Dow at 5.6%. The analysis provides one of the most complete pictures so far of the origins of single-use plastics. The list includes chemical, oil, and gas companies, multinational corporations, and state-owned entities. The analysis was conducted by Minderoo Foundation of Australia, working with the London School of Economics, Stockholm Environment Institute, and Wood Mackenzie. The environmental damage could worsen quickly, the report says in projecting that the capacity to produce the materials in single-use plastics could increase more than 30% worldwide in the next five years. “The trajectories of the climate crisis and the plastic waste crisis are strikingly similar,” former Vice President Al Gore wrote in a statement attached to the report, per NPR.

Because most plastic is made from oil and gas, he wrote, more greenhouse gas emissions are produced, worsening the climate crisis. By 2050, the report said, single-use plastics could be responsible for up to 10% of greenhouse emissions globally. Of the 20 companies, 11 are based in Asia, four in Europe, three in North America, one in Latin America, and one in the Middle East, the report said. The banks that fund that production include Barclays, HSBC, Bank of America, Citigroup, and JPMorgan Chase. On the list of countries that went through the most single-use plastics per person in 2019, Australia was No. 1. The US, South Korea and Britain followed. Citing health and environmental dangers, the chairman of the Minderoo Foundation called for “firm intervention from producers, governments and the world of finance to break the cycle of inaction.” (Read more plastic stories.)